By Carliss Million March 2, 2020 No Comments

THE COPENHAGEN-BASED NONPROFIT THAT GETS SENIORS BACK ON BIKES IS RAPIDLY GROWING AROUND THE WORLD.

Ole Kassow, of Copenhagen, Denmark, was riding his bike to work one morning in 2012 when he noticed an old, disabled man sitting on a bench outside a local nursing home. The man reminded him of his father, who uses a wheelchair.

Knowing the challenges that come with limited mobility in old age, and thinking about how deeply engrained bicycling is in Copenhagen culture, a thought occurred to him: The man likely hadn’t ridden a bike in a long time and, Kassow thought, he probably missed it.

“I couldn’t get that thought out of my head, that I needed to get this man back on a bike,” Kassow told Bicycling.

Kassow acted on his idea the very next day by renting a rickshaw and offering rides to seniors at the retirement home. He ended up piloting a woman, who began telling him stories about living in Copenhagen as they rode around. When they returned, the facility’s staff were amazed at the woman’s energizing reaction to the ride.

These volunteer rides grew into what is now the nonprofit Cycling Without Age. The organization partners with nursing homes and senior care facilities around the world to offer bike rides to the people who live there. Volunteers who sign up can pilot rickshaws, also known as trishaws, which can carry up to two passengers. There are also bikes that can accommodate wheelchairs. 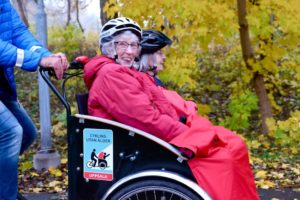 The primary goal of the program is to improve the lives of seniors by getting them outside and back into the community and bringing them joy through riding a bike. According to Kassow, the program gives its participants a greater “sense of belonging.” It’s also a way for the younger generations who volunteer to connect with and learn from older generations.

“It quickly became something that the other care homes wanted to do in Copenhagen,” Pernille Bussone, the global community captain for Cycling Without Age, told Bicycling. From there the program began to spread into neighboring countries, like Sweden and Norway. Now, the organization boasts chapters in more than 45 countries. The results of these rides have proven almost miraculous.

“It really has the potential to change people’s lives dramatically,” Kassow said.

Their evidence of this was anecdotal at first. But after conducting an impact study in their Singapore chapter, they discovered that these rides have the potential to improve participants’ reported mood and outlook on life by up to 80 percent.

While the shorter, one-day outings are perhaps the most common type of ride that volunteers offer, some of their volunteers have gotten creative. One chapter in Sweden, for example, began offering ice-fishing trips using the trishaws.

They’ve also introduced bike touring in certain chapters, which consist of three or four day outings in large groups, that include family members of the elderly passengers and staff from their nursing homes. They stay at hotels and often have picnics outside. Some of the bike tours have had more than 100 people take part.

Kassow’s mom, whom he frequently pilots around, says that the trishaw bike tours are the only kind of vacation she wants to go on now.

“I ride a lot with my mom,” he said. “She’s 81, and she loves it. She says that’s her preferred means of transportation.”

The organization is now gaining ground in the U.S. where there are currently 418 chapters. Wisconsin and Minnesota have particularly extensive chapters because the states have programs dedicated to improving nursing homes and Cycling Without Age volunteers have been able to receive funding to purchase trishaws.

“I’ve personally witnessed the joy and effects getting seniors back outside brings to their quality of life,” Shelly Sabourin told Bicycling. Sabourin was the director of nursing at a care facility in Madison, Wisconsin, when she found out about the program in 2016. She now heads the board of directors for the organization’s U.S. program.

How may we direct your call?